I don't normally use my sewing machine for much except for finishing edges with zig zag stitch. My machine has been in the shop having a service for two weeks now, so I have been using the time to plan some new projects.

Of course, my 'to-finish' pile is as big as ever, but a lot of the items there need edging. So I will put that on hold until I get my machine back, and enjoy looking at Renaissance portraits and dreaming!

At this stage, I need a more comfortable pair of bodies and want another 3/4 length coat. I have altered my stays pattern to what I hope is a more comfortable and practical version, and I am still working out the plan for the decoration and neck treatment on the coat.

I will keep you posted!
Posted by Fionn O'Mara at 6:39 PM No comments:

Email ThisBlogThis!Share to TwitterShare to FacebookShare to Pinterest
Labels: plans

The more hours I spend looking through Renaissance portraits, the more I come to realise that a pair of white and gold stripey sleeves is de rigeur for my persona.

Here are some lovely examples:


And, just so this doesn't turn into a Bianca Capello fanpage(!):

Possibly Isabella de Medici and her son by Allori (1574 )-http://aneafiles.webs.com/eleonoraditoledo.html

Portrait of a Noblewoman -  niceartgallery.com

Recently, my Barony hosted a Coronation and the feast had a Midwinter/Yule theme. As part of the entertainment for the evening, several subtleties were presented. One of the subtleties was a flaming yule log made of fig pudding and marzipan.


Subtleties are illusion foods that are designed to provide entertainment and interest at a feast. In period, they were often made to showcase the wealth and creativity of the host, and to do honour to important guests.

I adapted a recipe for Figey from the book Pleyn Delit. I did a test-run of the redacted original recipe, and it was delicious but didn't hold it's shape very well. For the final product, I added egg as a binder and extra almond meal to firm up the mix. I baked the mixture slowly in a log tin that was 3/4 full. 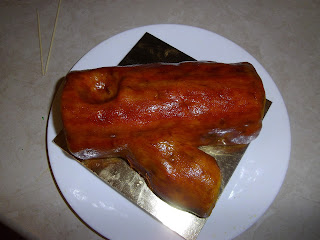 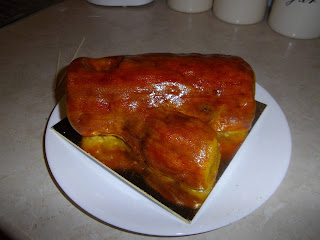 The pudding was shaped and a 'branch' added. The pudding was covered in marzipan which was painted with food colouring to look like a tree. I used a toothpick to put lines and whorls along the trunk and growth lines at the 'cut' end of the log. A depression was carved on the 'trunk' to hold an eggshell, and there was room for another eggshell in the 'vee' of the trunk and branch. Warmed brandy was poured into the shell and set alight to create the illusion of a flaming yule log. The subtletie was very well received by the guests. 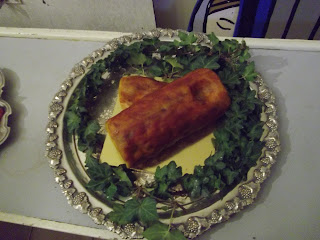 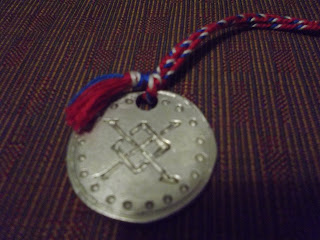 This is the entry token for the Midwinter Coronation that I recently attended. I just love that braid, and it inspired me to finally do something about learning to make narrow wares and braids.

So I bought this book from one of the lovely local merchants: 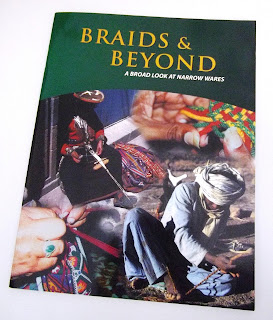 And when I got home from the event, my excellent Sister gave me this as a present! I think the Universe may be trying to tell me something!


By the way, these books come from one of the nicest SCA merchants you will ever meet. Find her at
http://www.coloniallakebooks.com.au/

Ever since I first heard about filet lace I have been searching for netting needles. For over ten years, I have searched every op-shop, junk shop, antique shop and market stall I could find looking for one.

Last week I popped into a junk shop in a country town, and what do you think I found? TWO! I felt like it was my birthday! With two different sizes, I am set to try my hand at filet net making. 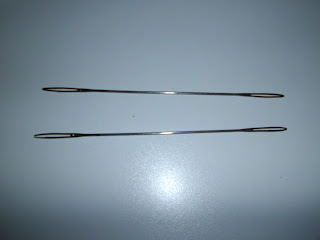 For our recent Midwinter Coronation, I was asked to make a subtletie with a hellbore (Christmas rose)  theme.

I used a bowl to make a base of silver foil which I covered with tinted marzipan to create a 'knoll'.


I tinted some marzipan green and rolled it to lay over the foil base. I added extra marzipan leaves to cover the sides.


I made the flowers and main leaves out of sugarplate. There are many period recipes available in books on the internet; I avoid ones which contain egg white because the sugarplate is not cooked. I use a mix of superfine sugar, lemon juice, gum dragon or gum tragacanth and rosewater. It tastes a lot like Easter egg candy.

I originally moulded my leaves and flowers by hand, but they were very irregular so I changed to a cutter.


I used green lustre dust to tint the inside of the flowers. In period, parsley juice was used as a green colouring agent, but it does not taste very nice, so I used a commercial colour.


Next, I 'glued' yellow non-pareils one by one to the centre of the flowers. I used white icing as 'glue' and applied them individually with a toothpick.


I left them to dry. A couple of days later, I noticed that the icing 'glue' had 'melted' the lustre dust and the yellow on the non-pareils. I was VERY disappointed.

I had to do some cosmetic repairs with new non-pareils and lustre dust to make the flowers look better. Then I began the tricky process of putting the subtletie together. 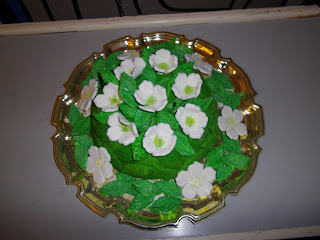 The completed subtletie ready to be presented to High Table. 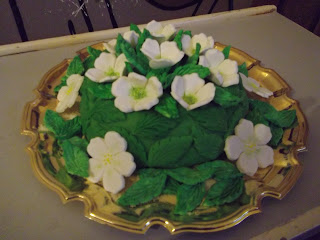 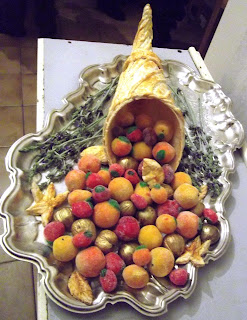 Here is a cornucopia that I collaborated on as a presentation piece for the recent Midwinter Coronation. It was presented to High Table and was well received.

Another talented member of my Barony made the pastry shell of the cornucopia and pastry leaves. The cornucopia is ornamented with decorative pastry swirls.

I made marzipan fruits to spill out from the horn of plenty and supplemented them with gilded nuts.

Last night was the big Royal event where all the gifts and articles were presented. Although I was a little disappointed that I didn't have anything new to wear, I was really pleased that I got all my gifts and projects finished.

The event was really wonderful. The hall was so beautifully decorated it took people's breath away, and the courts were beautifully done and really moving. The hard work of the populace of my Barony paid off, and the pieces that I worked on were really well received.

Here is some embroidery that I worked to go on an Elizabethan sweete bag. One of the newer members of my Barony did the design, and local artisans all worked one or two bags. The completed embroideries were sewn up into bags and filled with nougat and sweets to be given out to the Ladies of the Rose. They seemed to be quite delighted by the presentation, although I admit that I was slightly distracted by looking at their beautiful garb!