Another posting of delicious vintage shoes from American Duchess: 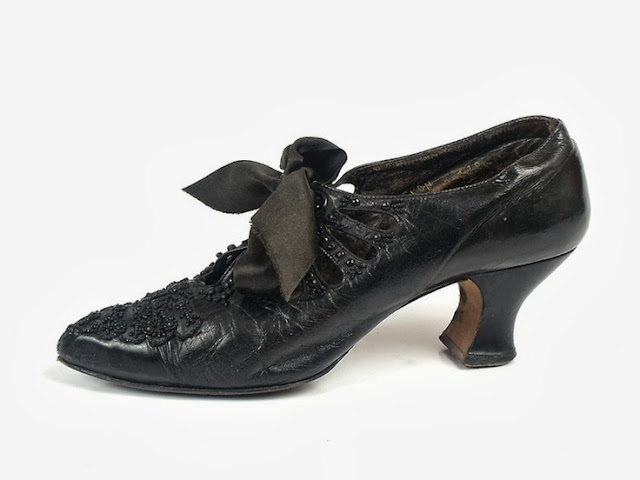 Reference Notes - Images of Squirrel in Medieval and Renaissance Art 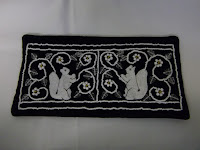 I recently did some research on squirrels in Medieval and Renaissance art to help me design my embroidered German brustfleck. Here are some of my notes.


Squirrels in imagery have had various symbolic meanings throughout the ages. Sometimes they were seen as symbols of grasping covetousness, and at other times they were seen as an affectionate friend. (Biographer Jonas of Bobbio describes Saint Columbanus of Ireland as having a squirrel companion.) (Ref: http://www.abbeville.com/blog/?p=390)
The squirrels' sensible hoarding of food for winter was not properly understood and was considered greedy.

Squirrel fur was used widely in clothing. Squirrel fur was also depicted in heraldry. Vair is the representation of patches of squirrel fur in an alternating pattern.
See  http://en.wikipedia.org/wiki/Vair for more information. 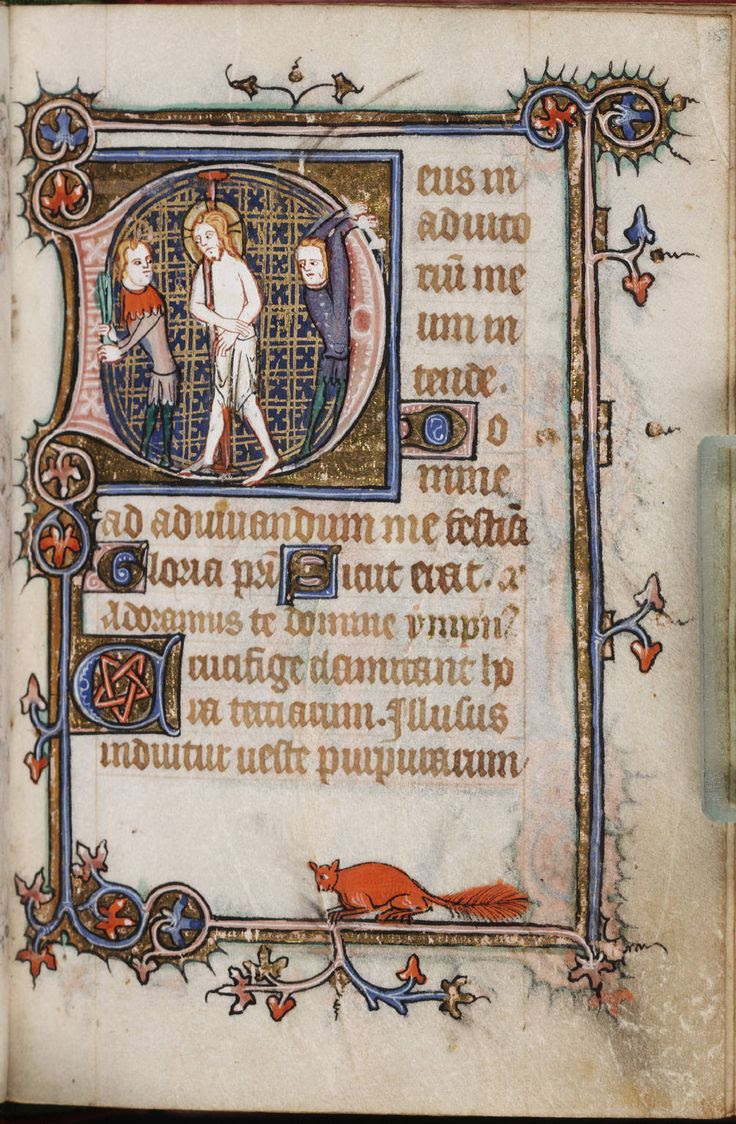 The page is from a fourteenth century Book of  Hours in the Beinecke Libarary Collection of Yale University. Beinecke MS 657.
Also http://sunsite3.berkeley.edu/hehweb/index2.html 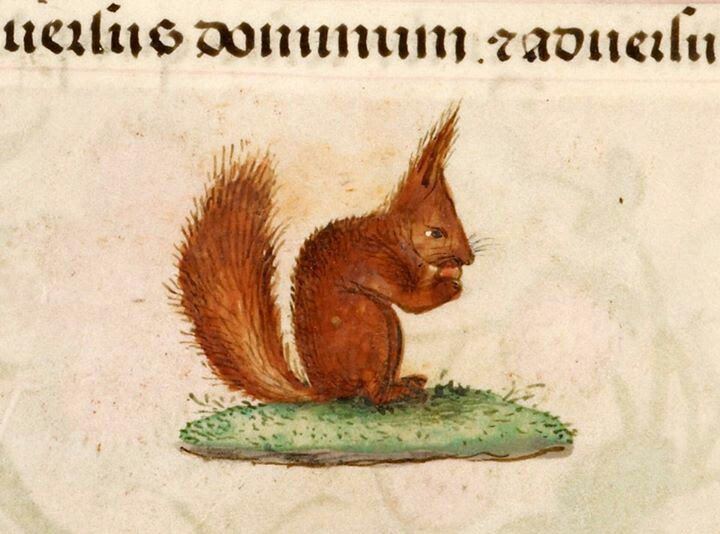 This image is from a Baptistry door frame in Florence and dates from the early Renaissance. It was created by the artist Lorenzo Ghiberti (1378-1455). Please see the SCALA archives for more lovely images and information. Albrecht Durer (1471-1528) was a German printmaker, painter, mathematician, theorist and engraver. He is famous for his engravings, religious works and meticulously detailed natural imagery. More information is available at http://en.wikipedia.org/wiki/Albrecht_D%C3%BCrer 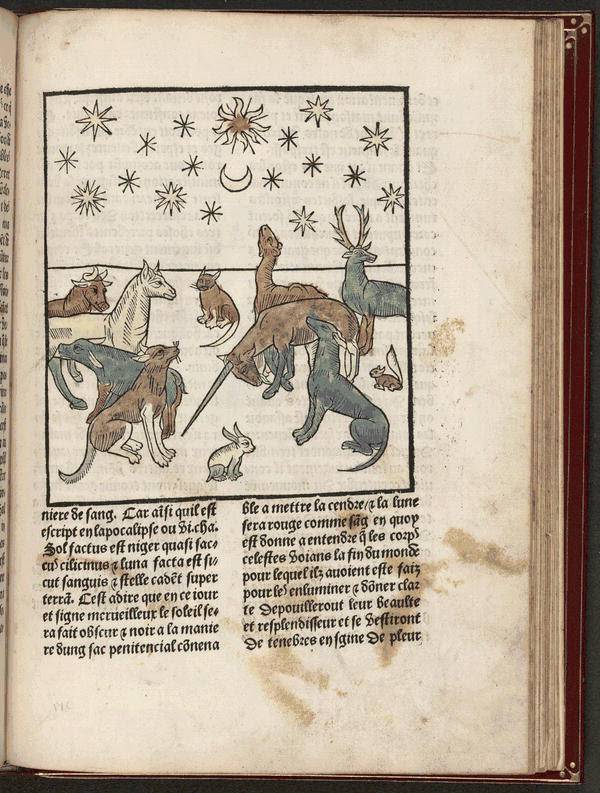 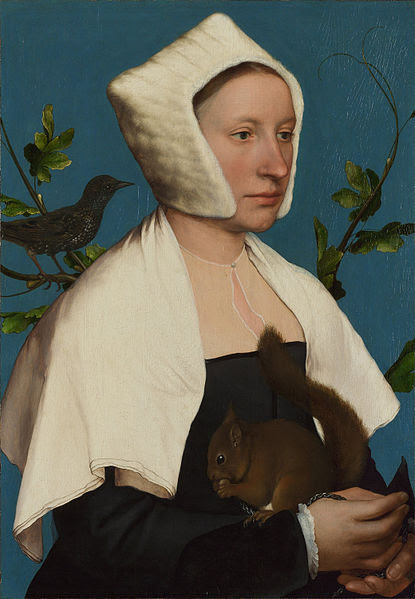 This oil painting was done on an oak panel and is believed by some to depict Anne Lovell. The sitter wears Tudor clothing.

Portrait of a Lady with a Squirrel by Francesco Montemezzano 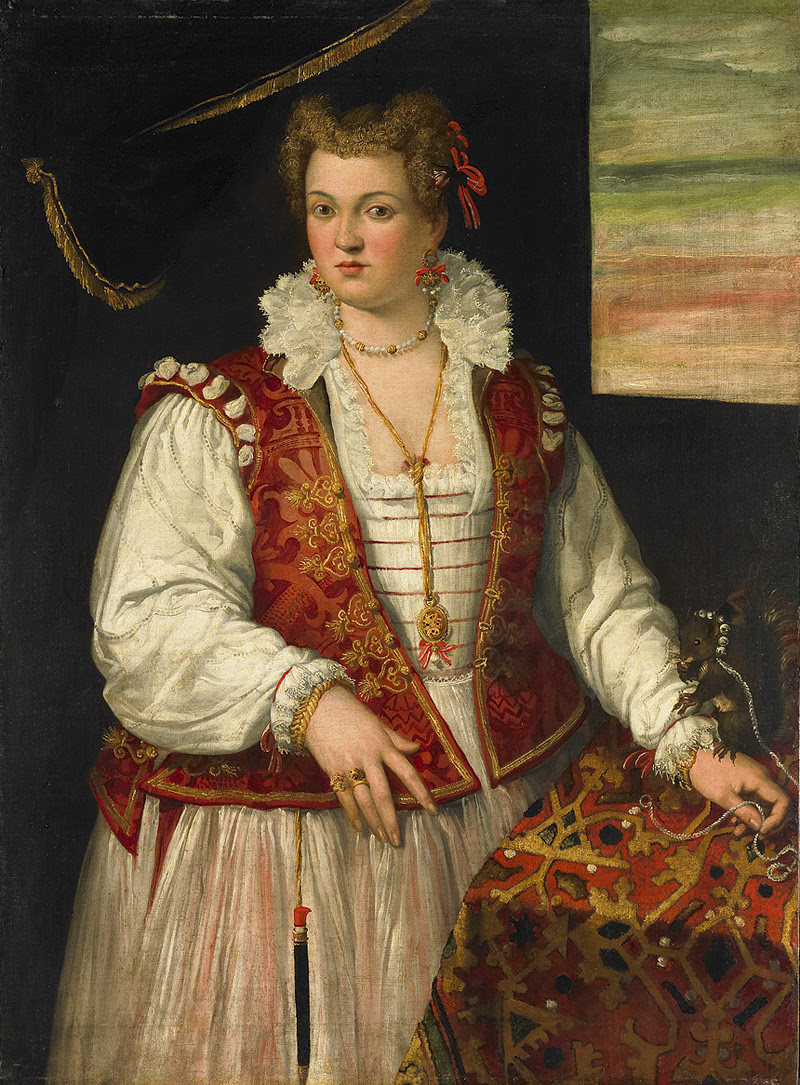 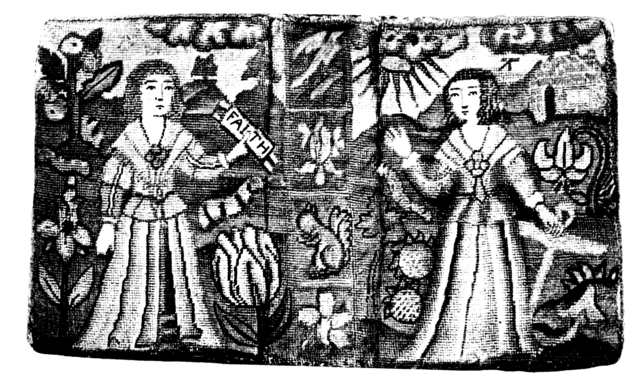 This embroidered book cover is listed in English Embroidered Bookbindings by Cyril James Humphries Davenport. This book has been published as an e-book and can be found at the link above. The book was published in 1625 and bound in 1635. The binding shows the figures of Hope and Faith. The e-book gives more information about this binding, but unfortunately does not describe what stitches have been used, or the materials.


Another drool-worthy shoe from American Duchess is now available: 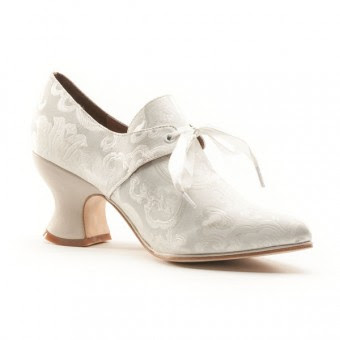 I'm having visions of spangled fans, beautiful fabrics, gilded everything and tons of diamonds!

Details are available from http://www.american-duchess.com/shoes-18th-century/pompadour-french-court-shoe-white

In the last six months or so, I have become quite interested in medieval and renaissance cooking, and have been trying my hand at a few recipes. I am particularly interested in recipes that I am unfamiliar with or which contain ingredients that I have not tried before.

"Take crust of bread and grind it small, take powder of galingale and mix with all,
Powder of ginger and salt also; Mix it with vinegar ere you do more,
Draw it through a strainer then, And serve it forth before good men."

The cinnamon and wine were added because they show up as ingredients in other versions of Sauce Galentyne recipes (e.g. p. 562 of Take a Thousand Eggs or More Vol. 2- from Ashmole MS 1439 and Harleian MS 4016.) I thought these ingredients would make for a richer sauce.

I was unable to obtain powdered galingal, so had to use the fresh root. Pounding fresh galingal is not an easy task. The piece I obtained was quite fibrous and woody. I believe that this sauce is normally a pink colour. Mine turned out beige coloured; I think because of the fresh galingal. Next time I make it, I might reduce the vinegar by a quarter of a cup.

I mixed the ingredients and let them soak, then passed the mixture through a sieve. 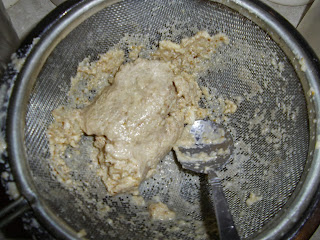 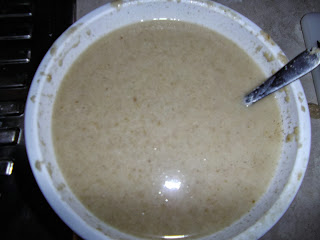 I wanted to try this sauce because it sounded interesting; I couldn't imagine that it would taste very nice. Although it tended to separate in the serving dish, it was actually a really tasty and piquant sauce that would be great with any meat. My family are unaccustomed to medieval flavours but were really impressed with this sauce as well.

The Powme Dorrys or Glazed Meatballs seemed perfect to go with this sauce.

"Take pork and grind it raw, I teach,
Mix it with beaten eggs; then
Cast powder to make it in a ball;
In boiling water you shall cast it
To harden, then you take,
Spit it fair for God's sake.
Baste it with yolks of eggs then
With a feather at fire, as I teach you;
Both green and red you may make it.
With juice of herbs I undertake;
Hold under a dish that naught be lost,
More commendable it is
as well you know."

I substituted chicken mince for pork mince as many people in my barony do not eat pork. I added small amounts of salt and pepper, and used rice flour as the powder to "make it in a ball". A wise friend who tasted the dish suggested that the "powder" mentioned in the recipe may have been Powdre Douce or a similar spice/seasoning powder commonly used in medieval cooking. Once she mentioned it, I couldn't believe that I hadn't thought of it. Using Powdre Douce or similar would make these meatballs much tastier. On their own they were a little bland (but very good with the sauce above.) I would also like to try this again using pork mince for a richer taste.

Mix flour, mince, 2 eggs and salt and pepper to an even consistency. Make small balls with hands and roll lightly in the extra rice flour. carefully drop balls into a shallow pan of boiling water and boil for 10-15 minutes (depending on size of ball and whether doing in one or two batches.) When cooked, drain.
Add cooked balls to a bowl containing well beaten egg yolks and coat until all balls are yellow. I fried mine lightly in a small amount of olive oil.

I omitted the herb juice dressing at the end because all I had at the time was spinach and sage, and because I planned to serve them with a sauce anyway.

These meatballs would also be good with garlic and onion powder added and cooked in chicken stock instead of water.

The boiled meatballs being coated with egg yolk prior to frying. 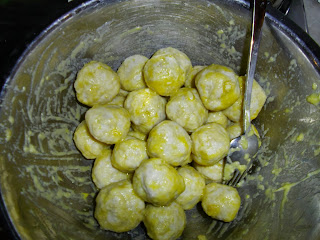 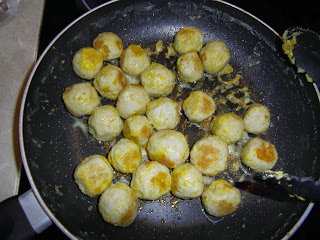 I have been working on a linen presentation pouch. I am using the new fine wool that I purchased recently. This is my first attempt at any sort of wool work. The trefoil design is being worked in split stitch. I intend to fill in the leaves once all the outlines are done. 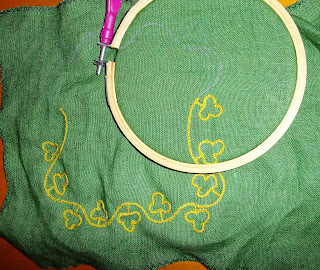 All the other projects that I am working on are surprises for other people, and I can't post pictures until they have been presented. 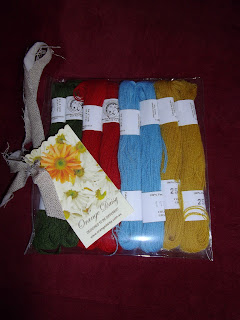 Another lovely package arrived; this time it was a beautifully wrapped package of embroidery wools from The Orange Daisy. I will post pictures of what I do with them.

Look at what came in the mail recently! It is full of lovely coloured plates and will be very useful as inspiration for illumination. 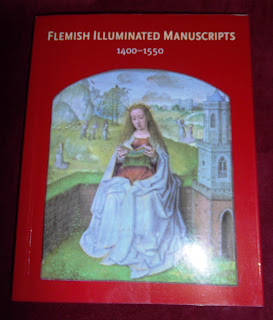 I haven't been posting much lately, but I have been busy. I have been working on several items for other people. (I will not be able to post about them until they have been presented.)

Another big project that is taking a lot of my time is preparing research notes for publication on my blog. I spend an awful lot of time researching imagery to support decisions I make in creating the things that I make, so I thought that I should collate my notes and post them so that they can help other people as a starting point for their own research. But it is proving to be a BIG job!
Posted by Fionn O'Mara at 12:59 PM No comments:

Check out these wonderful 1930's Oxford shoes available on special (pre-order) from American Duchess. That store, with all those beautiful shoes, is almost enough to tempt me to branch out into costuming from later periods! 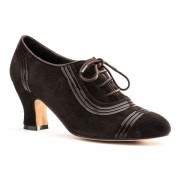