I picked up some sort of serious respiratory infection at the Medieval Faire and have been pretty much bedridden since. I've been put on prednisolone, which has done nothing for my lung complaint, but has made the pain in my hands and joints so much better! I couldn't work out why I was suddenly able to do embroidery ten times faster than normal. I wish that I could sew this fast normally; my 'to do' pile would be much smaller!

I have put the purple linen coat on the back burner temporarily as there are a few issues that I just don't think I will have time to deal with before the next big event.

One thing I have managed to finish is the second olive pocket. I couldn't end up matching the brown Coats embroidery floss to the DMC threads that were available at my local Spotlight, so I went for something similar. I won't matter too much as the pockets will not be seen side by side. I like the brighter floss much more, and the embroidery is much better because I did it in natural light. 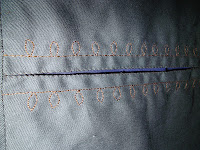 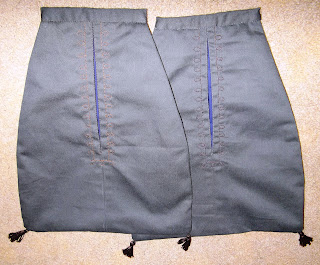